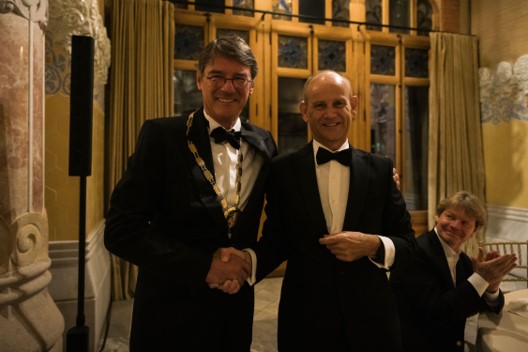 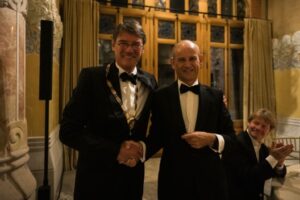 At the Annual Meeting Presidential Dinner in Barcelona, Mark Hazekamp passed on the Presidential chain to EACTS’ new President, Friedhelm Beyersdorf. Friedhelm is Medical Director at the Department of Cardiovascular Surgery, University Heart Center of the University Hospital Freiburg, Bad Krozingen. He has been an EACTS Council member since 2002 and was its Editor-in-Chief from 2010 to 2020. He has spoken to EACTS News about his role as President and his goals for the coming year.

“I’m very proud that the EACTS membership has elected me as their President for the coming year.

“Cardiothoracic surgery is a huge field today, and I believe that my role is to be President for all EACTS members, for all the regions around the world, and for all the sub-specialties. It is an honour, but it also comes with challenges.

“I would like to help and further develop all the sub-specialties because these are the core of EACTS. No single sub-specialty is more important than another, and I think this is at the heart of our strength. Since we have so many sub-specialties, we also have relationships with many sister societies. I want to improve and develop our relations with those sister societies. This includes all the other cardiothoracic surgery societies around the world, whether they are in East Europe, North, Middle and South America or Asia. I also want to strengthen our ties to scientific societies working in the same field, such as anaesthetists, and to pure research societies.

“I also think that it is important that we reach out to the allied health professionals. This means everybody from perfusionists to nurses and physiotherapists. There are many other professions who also care for our patients, and we need to have better contact with them and to work closer with them.

“We also need to build a better relationship with patient societies, so bodies such as the British Heart Foundation, the American Heart Association and others. Right now we are in contact with a worldwide patient-centred society and we are building new bonds between them and our Assocation.

“I have three key goals for the year ahead. The first goal is that we have to prove and demonstrate the results of our work for patients compared to alternative forms of treatment.

“This is already being done extensively. We will continue showing what cardiothoracic surgeons can do for patients, what the medical community can do, and point out the tremendous progress which has been made over the past years to improve the results of our therapy.

“There are advantages and disadvantages to every approach, and our job is to find the right solution for an individual patient. This has become more and more demanding because today there are so many options when in the past there was normally just the one.

“Having many options also means there are many discussions to have with patients, which could discourage them because they might get the impression that nobody really knows what’s happening. This is one of the reasons why we are trying to create better contact with patient societies. We must translate what we are saying into a language that patients can understand.

“The second goal is to communicate that cardiothoracic surgery has extremely good results.

“Mitral valve repair techniques have a mortality rate of less than 1%, which is unbelievable. When congenital cardiac surgery started in the 1950s, mortality was at 60 to 70%. Today the mortality is less than 5% for all kinds of congenital heart defects and for some even less than 1%. It’s extremely safe. Coronary bypass surgery is safe. This is what we need to demonstrate to the world. We must make our good results public.

“The third goal, and a big role for the President, is to open more doors for innovation in cardiothoracic surgery.

“But we need to keep innovating, and as President I would like to foster research and innovation in all four Domains of our Association – acquired cardiac disease, congenital heart disease, thoracic disease, and vascular disease. Perhaps because we have been so successful in our field we have lost sight a little of the utmost importance of innovation?

“We still have many diseases that cannot be treated today. For example, there is no treatment for atherosclerosis. We do know that smoking, diabetes, hypertension and high lipids are risk factors, but we do not know what really causes it. We can perform bypasses and put in stents to help people, but the disease itself cannot be treated. This is just one example. You could say that the ageing process is like a disease. The symptoms are very similar – joint pain, atherosclerosis, cancer, and neurologic problems. Though modern medicine and techniques have greatly increased the average life expectancy, we have not increased the absolute age. And yet I think there are techniques today that we can use to treat the diseases of ageing. As you can imagine, I think cardiothoracic surgery has a great role to play here.

“I’m very aware of the fact that one year is a short time to get anything done as President.

“While being President has its advantages, it also has its disadvantages! Why one year? Because we want to involve as many members as possible in the EACTS organisation, we want it to be something that really is open to everybody.

“I am preparing a proposal for the next executive meeting that covers all the three goals I would like to address. Of course, everything must go through this formal process, but I do hope that people will agree with me and support me.

“But I can see that there are some really very good things coming over the horizon during the next 12 months. We just have to be open to include these developments in our armamentarium. So I’m very positive about the future of EACTS and of cardiothoracic surgery in general. I think it looks great and I’m happy that I can be a big part of it.”