The European Association for Cardio-Thoracic Surgery is Europe’s largest and leading membership Society for surgeons, perfusionists and health care professionals involved in cardiothoracic care and treatments. We are active in more than 50 countries worldwide and boast an engaged membership of 4,000.

Over the coming years, we will be growing the reach, impact and influence of the Association globally and our publications portfolio is a key element in our planning.  We now wish to appoint our first Publications Director to be responsible for the operational activities and strategic development of our two world-leading journals, the EJCTS and the ICTVS.

This role is ideally suited for an ambitious and strategic professional with a meticulous eye for detail. You will have at least a working knowledge of one of the major journal submissions systems such as Editorial Manager or ScholarOne and enjoy excellent time-management, communication and interpersonal skills.  A salary of circa £50,000 plus pension and benefits and a central Windsor based office location are on offer for the ideal candidate with remote, flexible working considered.

Applications should consist of a full CV and a supporting letter, which should address key aspects of the responsibilities outlined here and the candidate’s personal suitability for the role.

Completed applications should be emailed to:  recruitment@eacts.co.uk
Closing date for applications: 24 September 2021
The appointment will be made subject to satisfactory references. 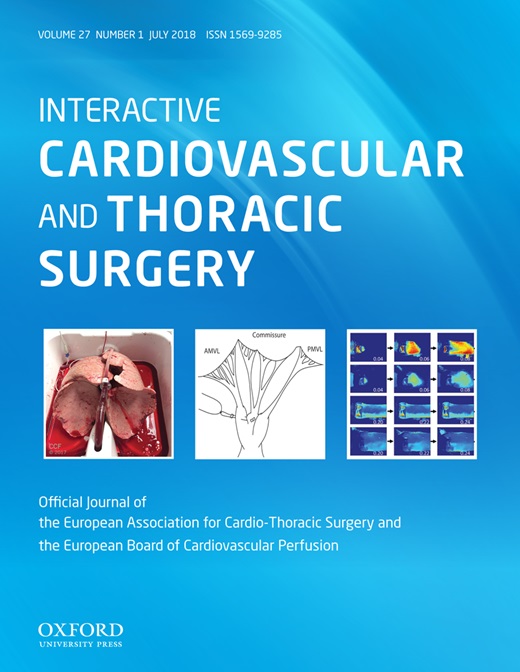 EACTS journals achieved their highest ever Impact Factors in 2020, according to new data published this July by global analytics firm Clarivate.

The Impact Factor (IF) is a metric that represents the average number of citations in a particular year for articles published in the two previous years. It is an established indicator of the importance or rank of a journal.

Rafa Sadaba, EACTS’ Secretary General, said: “We are delighted that our journals have reached their highest ever Impact Factors. This achievement reflects the quality of their scientific content and our authors’ significant influence on advances in cardiothoracic surgery.

“We hope these journals will have an even greater impact in the future. I encourage surgeons to submit their papers to our journals so that we can continue to advance our collective expertise and improve outcomes for patients.” 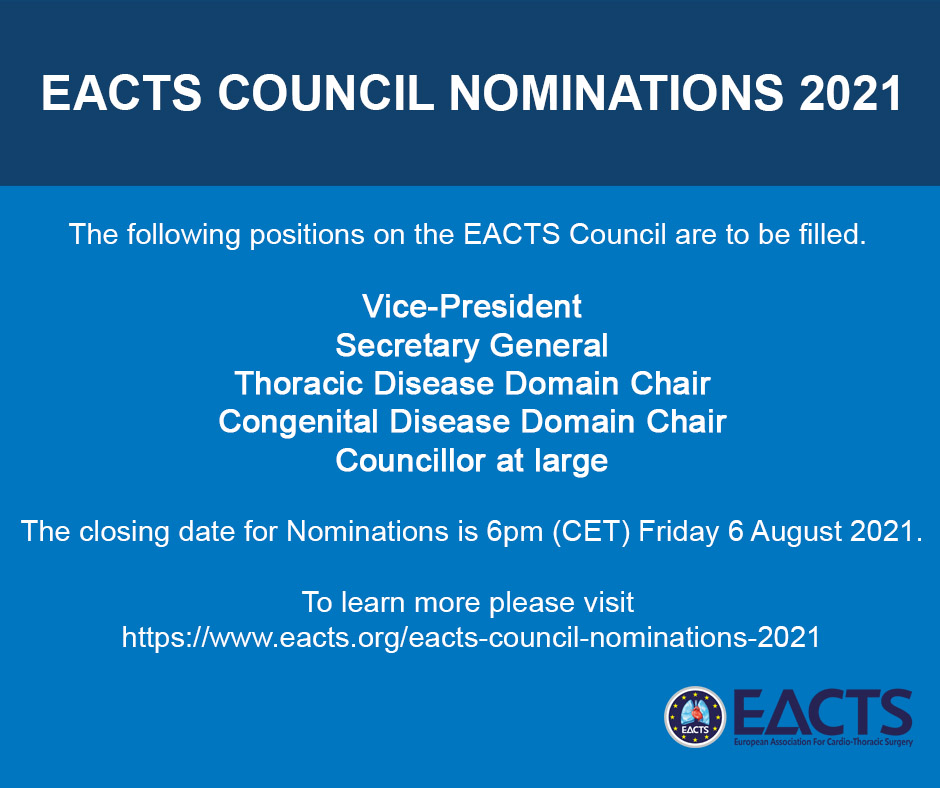 The Council (also known as the Board of Trustees) is the governing, decision-making body of EACTS.  The Council is made up of up to 15 members who each serve for set terms, in different capacities, acting at all times in the best interests of the Association, our members and ultimately the patients that we serve. Council meets at least four times a year and some members of Council may also serve other Committees or Domains that meet more frequently.

Each Councillor will serve a set term (normally of up to three years) and each year a number of new Councillors are appointed as the terms of current Councillors come to an end. Councillors to be appointed must complete a process of Nomination (detailed below), selection and eventually, ‘election’ by the members at the General Assembly in October 2021.

This year the following positions* on Council are to be filled.  A job description for each position is available by clicking on the title;

The Process of Nomination and Selection

To ensure as fair and transparent a process as possible, EACTS Regulations (part of our governing document) stipulate that a Nominations Committee be established to oversee the Nomination and Selection process.  This year, the Committee is made up as follows;

Any EACTS member can nominate a fellow member for a specified role on Council (there is no limit to the number of nominations a member can make). For avoidance of doubt, current Councillors, Domain and Task Force members may nominate, but members of the Nominations Committee may not.

In making a nomination, the person making the nomination must write a letter of support that includes;

The person making the nomination should send a digital form of this letter, with a brief Curriculum Vitae of the person being nominated, to the Chair of the Nominations Committee via the dedicated EACTS e-mail address nominations@eacts.co.uk

The closing date for Nominations is 6pm (CET) Friday 6 August 2021.

The Nominations Committee will consider all applications before making a recommendation to the EACTS Council.  Council will make the final decision as to those to be formally presented for election at the EACTS General Assembly on 15 October 2021 (Barcelona).  Those who have nominated candidates will be informed of the outcome of this decision before 15 October and those members to be nominated will also be contacted before the General Assembly voting process.

It is most likely that interviews will be held for nominees short-listed by the Nominations Committee for the Secretary General role. These interviews will take place, via Zoom, between 30 August and 10 September 2021.

*In October 2021, two other Councillor positions will also stand for election; the Honorary Treasurer and the Councillor at large (International Representative).  In June 2021, Council co-opted Mr Mark Whiteling to the role of Honorary Treasurer and Mark will stand for election in October 2021. Councillor at large (International Representative) is a role filled through invitation, by Council, to a representative of a sister Association (usually STS). Therefore, nominations will not be considered for these two roles.